Those of you cool enough to attend the 2010 ITrack User's Conference already got a look at this new feature. For everyone else: don't worry! It's already been released to all ITrack Pro users via the autoupdater, and you can try it out now. (If you don't have it for some reason, give us a call so we can fix you up.)

What does this awesome feature even do?

So it turns out that most of the companies who use ITrack will purchase used vehicles on a regular basis, with the intention of dismantling it and selling the parts individually. Who would have guessed?

To make this easier, we wanted to add something that would let you

So we added the idea of a "vehicle bid" to ITrack.

A bid is a vehicle record that can store most of the information that ITrack normally keeps track of when it comes to vehicles (including what parts there are). It doesn't show up in your inventory, though!

You can view bids that you have going on in a new tab, which just recently showed up on the home screen.

Making the vehicles screen do stuff

Making a new bid is easy!

Vehicle bids are always created on the vehicles screen. When you first start considering a vehicle to decide if you want to purchase it, you can create a bid almost the same way you create a vehicle - click the arrow on the New button at the top, and click Bid (see image). 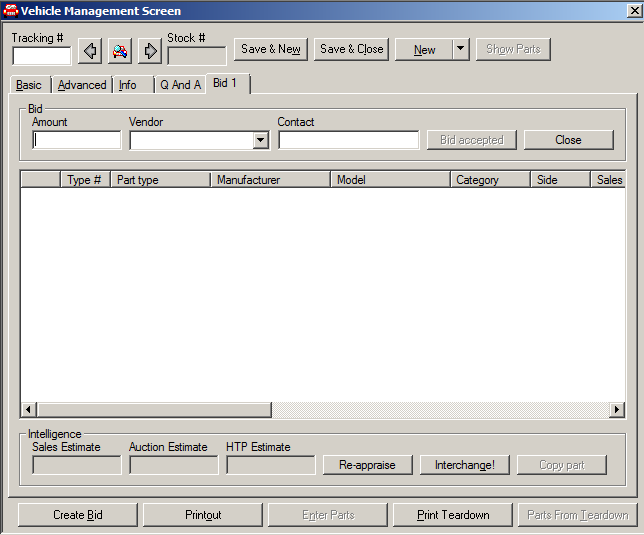 So, you're thinking of buying a vehicle...

This is where you enter in everything that you know about the vehicle so far. Nothing should be too different from when you're entering new vehicles into inventory.

The bid tab will act very much like the teardown tab - potential (unchecked) part records will show up as soon as you pick a make/model/year for the vehicle. When you save this vehicle bid, those parts will NOT be saved to inventory!

The bid tab has a few new pieces of information you can enter if you like - how much you're thinking of paying for the vehicle, the vendor who's selling, and the name of the guy you've been talking to.

And this is where it gets good.

As soon as you check a part and select an appropriate manufacturer/model/category, ITrack will look up these useful numbers for you and fill them in, giving you a better idea of what the parts might be worth.

What exactly do those numbers mean?

The Sales Estimate number is based entirely off of your previous sales. ITrack will look back over your sales history, looking for all parts with the same part type and manufacturer. It will then add all those sales together (paying more attention to sales of parts with the same model or category), and give you an average sale price.

You can do similar sales estimates on your own, using the new Sales Estimate screen that recently appeared in Pro. It's still pretty simple at the moment, but we're hoping it can keep evolving into a very useful tool.

These numbers are only available to companies who have an agreement with Berryhill Auctioneers that allows them access to Berryhill's sales data.

This number is similar to the sales estimate value, except that it is pulled from all sales at Berryhill Auctioneers auctions (defaulting to auctions from the last year).

The number in this column should be about the equivalent of going to HeavyTruckParts.net, searching for the selected part, and then averaging the prices you see there. You can use this field to get an idea of how other people are pricing the same part.

More details on these numbers

For all three of these columns, you can mouse over any field to see the total number of records that were used to find the average prices, as well as the minimum/maximum.

If you close a vehicle or a vehicle bid, and reopen it later, these numbers will all be the same as they were before. If you would like to refresh them all at once (to get the latest data since the last time you checked), you can hit the "Re-appraise" button at the bottom of the tab.

At some point, you'll have to decide whether or not you're going to purchase the vehicle, or tell the seller to shove off. Ideally, the estimate numbers on the various parts give you a good idea of what to offer!

If you end up deciding not to buy the vehicle, that's fine - just hit the "close" button at the top of the bid tab. This puts the bid record into your history - neither the vehicle, nor any of the parts you checked, will go into inventory. You can always reopen the bid later if you feel like making an offer on it sometime later.

If you buy the vehicle, you can just hit the "Bid accepted" button at the top of the tab. This will turn the bid into a full-fledged vehicle record, and add all of the parts that you checked into your inventory. If you do this, the bid tab will always be available when you open the vehicle - so you can always go back and see what the estimated values were for the parts, and get an idea of why you bid what you did on the vehicle.

Buying whole vehicles based on the value of their parts is something that is relevant to many of our users. This feature is brand-spanking new - we'd love your input on which parts are useful (or not so much), and any ideas on how it could be better.

Call us and let us know how it works for you!